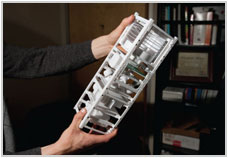 As regions of space become more crowded, the threat of collision is expected to rise. Eventually, some regions of space could become too crowded for future launches. LLNL is considering nanosatellites to improve our situational awareness of space objects.

One type of nanosatellite (defined as an artificial satellite with a launch mass between 1 and 10 kilograms, or 2.2 and 22 pounds) is the “cube satellite.” CubeSats, as they are nicknamed, measure 10 centimeters on a side, just a bit larger than a Rubik’s cube. A pair of three-unit CubeSats (called 3U CubeSats) equipped with optical imaging payloads (pictured) will demonstrate the main elements of the Space-Based Telescopes for Actionable Refinement of Ephemeris (STARE) concept. During launch, large satellites require ballast to balance the spacecraft. By taking the place of ballast dead weight, CubeSats can ride along as auxiliary payload, making them fairly inexpensive to launch.

In the first phase of the STARE project, software tools are being developed for enabling operators to predict collisions with high accuracy, using the improved positional information that nanosatellites will provide. Later this year, in the proof-of-concept phase, the Livermore-developed technology that makes use of these common small satellites will be launched into space. The Laboratory’s idea could be described as using traffic cameras in orbit to track space objects. A multidisciplinary team of physicists and engineers at Livermore developed the STARE project with funding from Livermore’s Laboratory Directed Research and Development Program. To develop this new technology, Livermore established a multi-institution joint venture between Boeing, an aerospace company with a history of bringing satellite products to market; Texas A&M University and the Naval Postgraduate School, two academic institutions with research expertise in this area; and the National Reconnaissance Office, the federal sponsor of the first-mission CubeSats.

If the initial mission is successful, Livermore could begin building nanosatellites for various applications, such as space weather and other scientific missions. Eventually, the Laboratory could develop a full constellation of nanosatellites proposed as a later phase of STARE. For an 18-nanosatellite constellation, STARE has the capability to reduce the collision false-alarm rate by 99 percent, up to 48 hours ahead of the closest approach, which would be attractive to satellite owners or providers. While typical single satellites cost several hundred million dollars to one billion dollars, a full constellation of 18 nanosatellites to track space debris costs only a fraction of that—about $30 million.