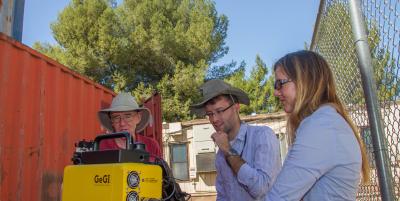 The ability to measure gamma radiation accurately and discern its origin is useful to a wide range of professions, including security personnel, first responders, scientists, and health professionals. Gamma rays are emitted from stars and other energetic astrophysical processes as well as from nuclear and radiological materials used to generate electricity and in medical diagnostic equipment. Gamma radiation is useful for identifying unknown radioactive sources and for studying basic nuclear physics processes.

Lawrence Livermore National Laboratory, long a leader in developing accurate instruments to measure radiation, is a pioneer in portable, lightweight, extremely sensitive gamma-ray detection technologies. Lawrence Livermore’s family of gamma-ray instruments—some of which are now commercialized—are used by U.S. Homeland Security and the international nuclear nonproliferation communities for detecting clandestine nuclear materials. The germanium-based, gamma-ray imaging (GeGI) detector leverages an earlier technology called GeMini, which was the gamma-ray spectrometer onboard the Mercury MESSENGER spacecraft that sent back data about the composition of the planet Mercury during flybys beginning in 2011.

Newest Member of the Family 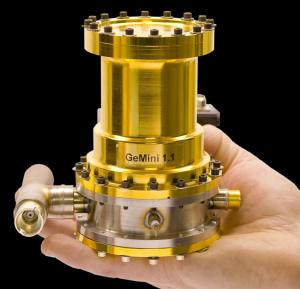 Livermore’s GeGI Detector, evolved from technology built at the Laboratory, is the newest member added to the gamma-ray detector family. Now available commercially from PHDS Co., the GeGI is the first portable, highly sensitive gamma-ray detector that identifies the emitting radioactive materials and their location. The battery-powered GeGI device weighs about 30 pounds, and measures 12 by 9 by 6 inches.

As with other similar devices, the GeGI’s core is a high-purity crystal of germanium that converts gamma-ray photons into electron pulses, which are collected by an imposed electric field. The higher the energy of the gamma ray, the greater the number of electrons collected. The GeGI gathers both gamma-ray energy and imaging data for isotope identification and location determination, respectively.

To measure a very small signal at great sensitivity requires that the germanium crystal in the GeGI (and other similar detectors) be kept extremely cold—less than 100 degrees kelvin (–173°C). A lightweight, low-power Livermore-designed cooling system leveraging the earlier GeMini helps maintain the crystal at those temperatures. Older gamma-ray detectors are laboratory-bound because they depend on liquid nitrogen for cryogenic cooling.

In tests, the GeGI has been shown to operate reliably at temperatures as high as 311 degrees kelvin (37.8°C) at 85 percent relative humidity. It can detect and localize a point source of gamma radiation within minutes, depending on the strength of the signal and the distance from the source. In a test conducted in Chicago, a GeGI detector successfully identified a source of highly enriched uranium-235 that was 28 meters away in 15 minutes and localized the source in 39 minutes. The weakly radiating uranium source and the distance proved to be a tough problem because that type of uranium emits gamma rays that are low energy and does so at a relatively low rate, compared to other radiation sources. However, the GeGI detector was sensitive enough to make an accurate determination. 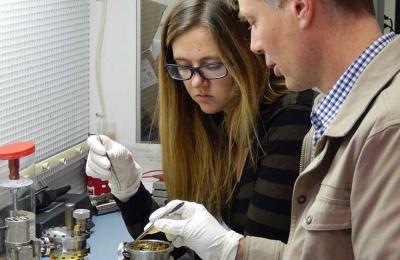 The GeGI detector is a tool for radiological and nuclear defense. A highly sensitive, portable device for the detection of nuclear materials, the GeGI will assist first responders in emergency situations where rapid identification and location information is a time-urgent need. It will also help law enforcement personnel tasked with interdicting smuggled nuclear materials. The technology’s usefulness will grow as it becomes more field ready.

The technology can also be a useful tool to the international nonproliferation community working to verify nuclear activities. For instance, inspectors can use the GeGI detector to determine whether a building declared to be a nonnuclear facility shows signs of anomalous radioactivity and localize the specific site of that anomaly by mapping the radiation environment.

The GeGI detector has demonstrated in field testing to distinguish, localize, and determine the source of radioactive waste. For this reason, it has potential application in nuclear materials management and environmental monitoring.

In nuclear power plants and other types of nuclear facilities, the GeGI detector can identify contaminated equipment or localize radioactive material accumulations that might indicate system issues. The device can also help verify the integrity of critical components and assist in decommissioning and decontamination activities. The GeGI can also be used in scientific research where a sensitive field detector is needed.

The team will continue to evolve the GeGI for greater ruggedness, sensitivity, and improved field readiness. The goal is to make this technology as accessible as possible to average users for various applications.