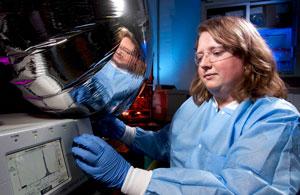 Aerosol detectors typically serve as the initial indicator of a terrorist attack involving a biological threat agent, or an accidental release of an airborne toxin. However, challenges involved in leveraging the use of detectors in public venues include knowing how air will flow through the indoor or outdoor environment and being able to identify the optimal location to place detectors.

To protect individuals from biothreat agents, we need to be able to detect when and where a biological agent is disbursed, and understand how it might be transported by people and vehicles, thus expanding the threat to new locations.

Tests using identical or similar surrogates allow scientists to monitor airflow patterns. Scientists use these tests to understand how airborne particles are transported, and pinpoint areas where particles “pool” in enclosed spaces.

This knowledge is needed to understand exposure pathways, where sampling should occur to determine actual concentration amounts, and to aid in facilitating fast and effective cleanup.

DNA-tagged sugar particles developed at Livermore have the properties needed to simulate disbursement and transport of aerosol particles that are easily inhaled. Known as DNATrax (DNA Tagged Reagents for Aerosol eXperiments), these novel microparticles offer a safe and versatile approach to track the movement of airborne contaminants. DNATrax particles are not harmful to humans or animals.

By adding unique DNA “barcode” sequences to the sugar particles, scientists can produce a wide variety of test particles that can be easily differentiated, making it possible to release and test them simultaneously. The unique barcodes also eliminate the need to conduct decontamination between tests, dramatically reducing the cost and time to run experiments.

DNATrax was developed as a safe surrogate for the Bacillus anthracis spore bioagent, since most naturally occurring spores are not safe for public release. Additionally, the surrogate offers a high-sensitivity detection method that is required to understand key public health issues. The research team conducted both lab-based and large-scale field studies using DNATrax to validate its capabilities for use as a pathogen surrogate.

Livermore researchers demonstrated the ability to produce DNATrax in a range of sizes, adjusting the microparticles to simulate different-sized pathogens. They also demonstrated the ability to create unique sequences of DNA bases, enabling them to create a nearly unlimited variety of test particles. Using diagnostic equipment, the scientists were able to analyze and understand the capabilities of DNATrax particles dispersed in aerosol chambers.

Following initial lab-based tests, the Livermore team conducted the first fieldbased proof-of-concept test at the Pentagon in 2012. In collaboration with the Pentagon Force Protection Agency, the researchers released sets of uniquely coded DNATrax inside a large government building. They collected the released microparticles and used polymerase chain reaction (PCR) technology and fluorescence particle spectroscopy to count the number of particles at various locations.

Test results demonstrated that the DNATrax microparticles were detected by both Pentagon and Livermore aerosol detectors. In addition, the tests enhanced the team’s understanding of indoor airflow created by heating, ventilation, and air-conditioning systems.

This information can provide insight regarding building design, as well as operation of a building’s air-handling systems, allowing for better pre-planning regarding potential bioterrorism incidents.

In 2016, the Livermore team participated in a field test for an underground transportation environment—the New York City subway system. As part of the five-day, multiagency test, the team produced DNATrax particles to simulate release of a biological agent. The objective was to provide key parameters to support existing predictive transport models to optimize public safety. Livermore developed the dispersion method and participated in daily environmental releases.

Thousands of the samples (from more than 50 subway stations) were collected to determine the quantity/concentration of particles that were in the air, settled on the ground, and found inside subway cars and on other surfaces along the entire length of the subway system.The field test shows that aerosol particles can be re-aerosolized from fixed surfaces and transported by people. In addition, the test demonstrated that DNATrax can be used to effectively model spore transport in populated environments.

Looking Ahead: Military Use

Plans are underway to explore how DNATrax can be used to understand biothreats in military environments. For example, the microparticles can be used for tests conducted in outdoor venues, where airflow is impacted by environmental conditions such as humidity or wind speed.

Tests will also verify whether the DNATrax surrogate has similar re-aerosolization and transport properties as bacterial spores of interest in military environments. The technology can be used to evaluate health risks to warfighters in various scenarios, and provide input regarding effective protective measures for military personnel.

DNATrax supports efforts to respond more effectively to biothreats by safely simulating the disbursement and transport of airborne pathogens. Airflow tests using the surrogate can help determine where to place detectors, ensure that detectors are operating effectively, and allow for more effective clean-up operations. Tests can also help experts plan safe evacuation routes based on identified airflow patterns in the environment.