Geothermal energy is, in the U.S., an underexploited clean source of energy that uses the Earth’s heat to generate electricity. In the past, geothermal developers typically drilled into existing reservoirs of hot subsurface water, which is pumped to the surface, and used to heat a working fluid that turns a turbine to generate electricity. But reservoirs with abundant hot water are rare compared to those that possess high-temperature rock without enough existing underground water to pump to the surface. 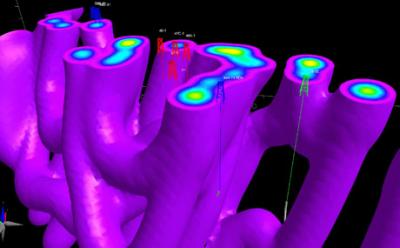 In an EGS, the developer drills a number of holes into rock to reach a high-temperature zone, and injects water into some of them to create new fractures or open pre-existing fractures, thereby enhancing permeability, and allowing fluid to circulate and gain heat. Some of the holes are production wells through which the now heated water is drawn back to the surface, used to generate electricity, and then re-injected, forming a closed-loop system. EGS offers the opportunity to generate power from a much broader range of locations, but it is a new technology. Scientists need to learn more about how to identify appropriate drilling sites, and maximize the production life of EGS fields.

Livermore researchers have developed a simulation tool that models the network of fractures in an EGS field to study the interactions between fluid flow, temperature change, and associated rock deformation. Using the GEOS code developed at Livermore and running on high-performance computers (HPC), the model combines thermal, hydrological, and mechanical properties of rocks and fluid flow to explore the circulation of geothermal fluid through the field. Their work is providing a better understanding of how to lengthen the life of a producing field.

Another research team is studying the geochemistry of the minerals found in geothermal fields. During fluid injection to open micro-cracks in the rock and increase the field’s permeability to water, minerals in these “shear zones” undergo changes in their rates of dissolution that affect the magnitude of the change in fracture permeability. Measurement of reaction rates for these minerals under high temperatures and pressures found in EGS fields are contributing to improving simulations and our understanding of the sustainability of EGS.