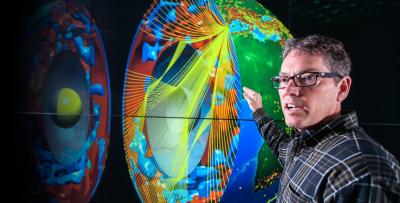 Geophysicists and seismologists at Lawrence Livermore National Laboratory conduct research with broad applications to the nation’s defense and energy security. Using sensitive instruments and advanced processing technologies developed at Livermore, we can measure ground motion half a world away. This allows the detection of potential clandestine nuclear tests, which would violate the Comprehensive Nuclear- Test-Ban Treaty. It also allows detection of large conventional explosions. Refinements of these tools are helping distinguish deliberate events from accidental ones, such as mine collapses, and natural ones, such as earthquakes and volcanic eruptions.

Livermore’s geophysical and seismological experiments and research also help provide insights into how the energy from explosions propagates through the ground, improving computer models used to simulate testing. In addition, these technologies facilitate identification of resources underground and allow the monitoring of their extraction. These technologies also help identify candidate zones for sequestering carbon to reduce climate change impacts by providing a clearer picture of where the resources and potential carbon sinks lie. 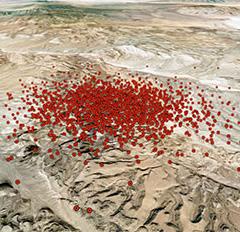 The work fulfills and advances Livermore’s mission of improving both the energy security of the nation, by providing better ways to find its own energy resources and sequester its byproducts, and its physical security, by providing the means for detecting detonations throughout the globe.

The same tools provide another kind of help. As scientists seek to understand the mechanisms and timing of earthquakes, Livermore’s seismological tools provide a window into tectonic processes underlying generation. These tools help mitigate seismic risk by focusing attention on the likely location and frequency of earthquakes and how much damage they might cause.

Advances in Event Detection and Differentiation

Underground events generate energy and seismic signals with unique, measurable signatures. Two types of body waves travel through the Earth in the aftermath of an explosion or a natural event: P- and S-type, or pressure and shear waves. Differences in the signatures of these waves can indicate whether an event is an explosion or a natural phenomenon, but sometimes the signals are weak and obscured by background noise. Sophisticated computer models and data processing techniques are needed to bring clear, accurate signatures out of the noise. 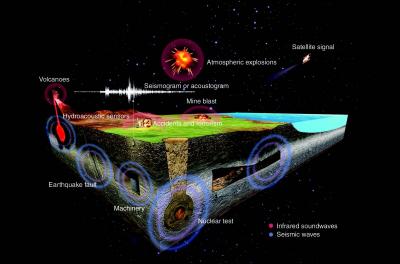 Bayesloc, the Bayesian Hierarchical Seismic Event Locator, is one tool Livermore researchers have developed to address the issue. Starting with data for a single event from many seismic stations, Bayesloc estimates the joint probability of the event’s true location by applying statistical analysis with respect to the surrounding events. It provides a better estimate of the actual location, magnitude, and seismic signature of an event than what is possible given a single event location. Livermore researchers also developed the Global 3D Seismic Tomography Model, LLNL-G3D, of how seismic waves propagate through the Earth. Consisting of 57 layers from the Earth’s surface to its core and 1.6 million nodes, the model gives its users the means of accurately calculating in three dimensions body waves’ travel times and paths from seismic source to station. The model incorporates data characterizing regional differences in Earth’s geology that affect the wave path, resulting in more accurate calculations of the location and magnitude of the event. The processing techniques developed for this software were successful in pinning down an accurate location for a nuclear test by the Democratic People’s Republic of Korea on October 9, 2006, as well as identifying a 2007 event in Utah as a mine collapse, not an explosion. Today, Livermore researchers collaborate with counterparts around the world in areas such as the Middle East, Europe, and Asia to improve the seismic modeling of the Earth, detect clandestine explosions, and support enforcement of the Comprehensive Nuclear-Test-Ban Treaty.

Livermore’s work in seismology and geophysics is advancing its national security mission on many fronts. Source physics experiments—underground detonations of conventional explosives at the Nevada National Security Site—are providing researchers with seismic data they need to refine modeling tools such as Bayesloc and G3D. Geophysicists are also working to improve techniques for estimating the yield of subsurface explosions.

Data analytics, the processing of large amounts of data, holds promise for improving the modeling of seismic wave propagation through the Earth, whose layers are anisotropic—nonuniform—and complex, as well as increasing the resolution of the 3D model of Earth. Livermore researchers are advancing computational seismology to make the identification of events faster, more automatic, and with greater certainty about their nature.