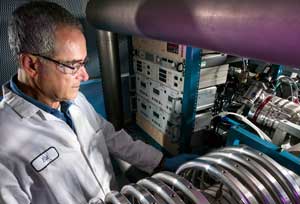 Scientists in the Laboratory’s Biosciences and Biotechnology Division use tools and capabilities provided by the Center for Accelerator Mass Spectrometry to speed up drug development to fight diseases.

Lawrence Livermore National Laboratory has a long history of using accelerator mass spectrometry (AMS) in biomedical applications. In the 1980s, Livermore was the first to apply AMS sensitivity in the field. Through funding from the National Institutes of Health, Laboratory scientists are further advancing biomedical AMS (bioAMS) by developing methodologies for correlating genetic differences in humans with their response to drugs and other biological/chemical substances.

AMS enables scientists to study the pharmacokinetics of carbon-14 (14C)-labeled drugs administered at near negligible levels (a high level of the 14C isotope in the metabolites after exposure to a sample means a high uptake of the drug in the person’s or animal’s body). Traditionally, biochemical samples are converted to graphite through a time-consuming method requiring extensive, laborious processing. The Livermore team developed a moving wire interface that bypasses this step by measuring samples as small liquid drops, either from discrete drops or from the output of a high-performance liquid chromatograph. Once placed onto the wire, the sample is dried and combusted into carbon dioxide gas before AMS analysis. This process enables results to be generated in minutes instead of days or weeks using traditional methods, and the sample size required is reduced by 50,000-fold—from 500 micrograms to 10 nanograms, or less.

Livermore and the UC (University of California) Davis Comprehensive Cancer Center are collaborating on a human trial involving 50 patients to determine how cancer patients respond to the chemotherapeutic drug carboplatin, which binds to DNA and is toxic for rapidly dividing cells such as cancer cells. The patients take a microdose of carboplatin, and the degree of drug binding is measured via the patients’ blood. Estimates suggest that there could be up to 90% variability in drug response because of a patient’s genetic makeup. Livermore’s goal is to help the medical community balance drug efficacy with toxicity to optimize and tailor drug treatment for each individual by gauging the effectiveness of the drug before chemotherapy is given. The team is also using AMS to study the response to other commonly used chemotherapeutic agents such as cisplatin, oxaliplatin, and gemcitabine. If the trial is successful, researchers theorize the test could eventually be used for almost any type of tumor.

Through funding from the National Institute of Environmental Health Sciences, Livermore scientists are collaborating with Oregon State University (OSU) to study the pharmacokinetics of polycyclic aromatic hydrocarbons (PAHs), which are the products of the incomplete combustion of carbon. PAHs are in food, air, and water. In high amounts, they are potential carcinogens. PAHs or PAH mixtures have been named as 3 of the top 10 chemicals of concern by the Agency for Toxic Substances and Disease Registry. Scientists are studying the pharmacokinetics of a PAH compound by giving human volunteers a small dose equivalent to that found in four ounces of smoked salmon and then checking blood and urine to determine if genetic differences play a role in how the volunteers process PAH. Most of the understanding on PAH toxicity has been the result of animal studies. The Livermore–OSU team is the first to look at these probable carcinogens at normal dietary levels and track the parent compound and its metabolites in humans. The study provides the first data to assess metabolite profiles and associate pharmacokinetics of a carcinogenic PAH in human volunteers at an environmentally relevant dose. By translating data from high-dose animal models to humans, this research improves the environmental health risk assessment for PAHs.

Other Livermore projects include a collaboration with the Defense Threat Reduction Agency to study the pharmacokinetics involved after exposure to a nerve agent and in developing a device that will enable measurement of a drug’s uptake into a single cell.

Faster, Cheaper, and Easier to Operate

Livermore researchers are working on a laser-based instrument that could replace AMS for low-dose biomedical studies. This tabletop-sized system will be less expensive, easier to operate, and amenable for use at clinical laboratories. These features also allow Livermore to support clinical studies that have potential for improving individualized cancer therapy. Livermore’s bioAMS staff currently work with more than 60 medical centers, universities, and other entities around the world on various studies.