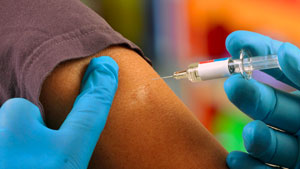 In the 21st century, biosecurity concerns have expanded beyond anthrax in subways and invasive species that can introduce disease to plants, animals, and the environment. History has shown that advancements in technology that are designed to be beneficial can also be used for nefarious purposes. With the number of such hazards multiplying quickly, possessing the capabilities to detect them early—and the flexibility to adapt technology to emerging threats—is more important than ever.

Just as imperative is the need to develop medical countermeasures, methods that will enable the nation to respond rapidly and protect the health of its population. With its interdisciplinary approach to solving biological challenges through integrating expertise in high-performance computing, chemistry, physics, and engineering, Livermore’s Biosecurity Center (BSC) is uniquely positioned to pursue research and development in biological detection and medical countermeasures. For more than 10 years, it has focused on translating fundamental biology to new tools that will protect civilians and warfighters.

Today, people and goods are highly mobile, and farm animals live in closer quarters than ever before. These dynamics can accelerate the spread of viruses and bacteria, some of which can be deadly to both humans and animals. As a result, identifying these agents quickly could help stop their proliferation. Collaborating with peers at the Laboratory’s Center for Micro- and Nanotechnology, Livermore scientists have developed the Lawrence Livermore Microbial Detection Array (LLMDA), a portable device with 180,000 probes that can detect over 12,500 microbes (including approximately 4,000 bacteria and 4,000 viruses) within 24 hours. This device is much more efficient than the polymerase chain reaction method, which is limited in the number of microbes it can test at one time. Commercially available and used in the pharmaceutical industry, LLMDA can also be applied to identify pathogens that have infected soldiers’ wounds, as well as pinpoint disease in commercial swine.

Animal tests do not always provide a complete understanding of how certain substances (such as toxins in the diet, or drugs) will affect humans. To fully understand dose-response relationships, BSC uses accelerator mass spectrometry (AMS), technology that was initially developed at Livermore for measuring radio isotope–labeled compounds. Through AMS, scientists can determine how much of a particular dose is absorbed by the body, where it goes, how long it stays there, and how a human system rids itself of the substance. BSC staff have applied this knowledge to understand the dose-response effects of particular toxins in the diet and to test the effects of potential new drugs in humans, among other things.

Accelerating the Path to Medical Countermeasures

Biological and chemical threats can cause serious health effects that require quick intervention and treatment. For these reasons, understanding both the mechanisms of exposure to these agents and their impacts is critical to medical countermeasure development. However, animal tests cannot accurately reproduce the impact of exposure to these agents (as well as to drugs or other substances) in humans. Thus, Livermore scientists developed the in vitro chip-based human investigational platform (iCHIP)—an engineering platform smaller than the size of a microscope slide that combines primary human cells, tissue engineering, and microfluidics—to test how the human body responds physiologically after exposure. iCHIP platforms that model the peripheral and central nervous systems, the heart, and the blood–brain barrier have all been validated by comparing how cells on the platform and cells in vivo respond to the same group of chemicals. The knowledge gained from these tests is a noninvasive way to speed up the development of medical countermeasures, effectively increasing the nation’s resilience to potential biological and chemical attacks.

Vaccines do not exist for many infectious diseases and biological warfare agents, making civilians and warfighters vulnerable to life-threatening pathogens. Moreover, those that are available can be limited in scope or elicit significant side effects. Livermore has developed a new way of effectively enhancing immune responses to vaccination using nanolipoprotein particles (NLPs), mimetics of naturally occurring high-density lipoproteins. By incorporating specific vaccine components directly onto NLPs, BSC scientists were able to show the efficacy of using subunit vaccines (in rats) to protect against Francisella tularensis, an extremely virulent pathogen that can be spread via inhalation. This breakthrough—which is key to understanding the mechanism of how to vaccinate against F. tularensis in humans—opens the door towards using NLPs to develop immunity against other pathogens that pose biosecurity risks.

High-performance computers are playing a greater role in helping Livermore understand data patterns in biological systems. For example, BSC scientists developed a computational model of the human heart. Through simulations, this model will provide insight into how the heart reacts to drugs.