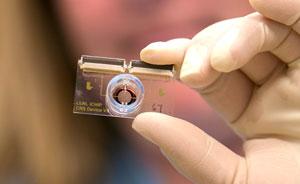 Developing medical countermeasures to fight diseases and potential biosecurity threats is a time-consuming, expensive process that often results in drug failure. More than 90% of therapeutic candidates result in unanticipated adverse events in clinical trials. Prior to conducting trials, drugs can only be tested in animal models. However, an animal’s response may differ from a human’s. Through Laboratory Directed Research and Development funding, Livermore researchers have developed an in vitro chip-based investigational platform (iCHIP) designed to replicate important aspects of human physiology. The iCHIP will speed development of medical countermeasures for diseases and provide methods to investigate the impact of exposure to biological and chemical agents and toxins without relying on animal testing.

iCHIP combines primary human cells, tissue engineering, and microfluidics to reproduce the body’s physiological response under various conditions. The Livermore team developed four tissue platforms: peripheral nervous system (PNS), central nervous system (CNS), cardiac, and the blood–brain barrier (BBB). The devices utilize biocompatible microelectrode arrays (MEAs) to map the propagation of action potentials—a membrane voltage change that is created by ion movement in and out of the cell in response to physical, chemical, or electrical stimuli. Using MEAs, the researchers can noninvasively record extracellular electrical signals from cell populations for long periods (days to months) without causing damage to the cell membrane. Livermore’s Forensic Science Center will use the measurements to test chronic low-level exposures to chemical agents to answer questions about human exposures that cannot be addressed in any other way.

The team has validated all four systems by comparing their in vitro devices to known chemical stimuli responses published from studies derived from traditional in vitro and in vivo assay methods; this gives the team confidence that their platform replicates the response of tissue in vivo.

The PNS platform uses dorsal root ganglia (DRG) sensory nerve cells from adult organ donors; the neural pathways provide a reliable response to pressure, temperature, and chemical stimuli. It is the first long-term study of primary human DRG on an MEA. The team validated the system by exposing cells to various chemicals known to elicit neuronal response, including capsaicin, ATP (activator of two types of neural and glia receptors), and potassium chloride, which causes depolarization in neurons. The CNS platform simultaneously cultures multiple brain sections to model the processes created by the brain’s complex neural network. The team validated the CNS platform by directly comparing in vivo results using ketamine (animal anesthetic), atropine (nerve agent treatment), and donepezil (Alzheimer’s treatment) in rodents. This work represents the most in-depth dataset to directly compare in vitro platforms with in vivo studies.

The cardiac platform integrates two arrays; one array—which is similar to that used in the PNS and CNS platforms—measures the electrical activity of the cells, while the other records cellular contraction through impedance measurements. Working with collaborators at Harvard Medical School, the team cultured human-induced pluripotent stem cell-derived cardiomyocytes on the platform. Traditional cardiac tissue platforms measure either electrophysiology or contractibility, but not both. Livermore is the first to publish results of experiments that noninvasively measure cardiac tissue growth, electrophysiology, and contraction simultaneously in real time. The team validated the platform by exposing the cardiomyocytes to norepinephrine (low blood pressure treatment) and blebbistatin (excitation–contraction decoupling compound). Studies using this platform could help inform cardiac liability earlier in the drug (countermeasure) development process.

Finally, the BBB platform incorporates a 3D barrier with shear stresses to mimic the constant flow of blood. Endothelial cells are cultured on the inside of a porous hollow fiber until a tight uniform monolayer of cells is formed. The team validated the platform by measuring the permeability of caffeine, dopamine, and fluorescently labeled dextran across the endothelial layer of cells. This model is one of the few BBB platforms to mimic the barrier that protects brain tissue from compounds circulating in the blood.

The team is working to more closely recapitulate both the biological and structural complexity of the CNS by adding multiple supporting cell types to the platform. They are also developing a 3D MEA CNS platform that they will validate against published studies and through side-by-side comparisons with animal tests. Although many features are conserved across species, studies have highlighted key differences between how animals and humans respond to certain stimuli. Eventually, the chip will include interconnected tissues from each of the body’s major functional systems. The technology will provide a safer, low-cost alternative to human trials, and will allow scientists quicker access to human-relevant data.