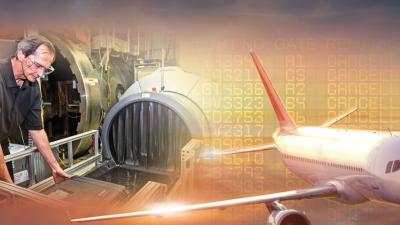 Every day, more than 2 million people board airplanes in the United States. Keeping these travelers safe is a complex job. Explosives—any mixture or substance capable of detonating—can be hidden in luggage, cargo, carry-on bags, laptops, or on airline passengers. Airport screening systems must be able to identify a wide spectrum of explosive materials. These include precursors, non-explosives used to make homemade explosives (HMEs). Systems also require the ability to respond quickly and adapt to continuously evolving threats. Accuracy, precision, and reliability are essential.

Throughout the last few decades, Livermore's Nondestructive Characterization Institute (NCI) has been a leader of U.S. efforts to develop and advance the capabilities of aviation security, critical infrastructure protection, and border security. The program's overarching mission is to find threats before they harm individuals. NCI's Livermore Explosives Detection Program (LEDP) is focused on improving aviation security by enhancing the sensitivity of screening technologies without increasing the number of false alarms. Comprised of an interdisciplinary team of scientists including physicists, chemists, computer scientists, and engineers, the LEDP team leverages cutting-edge methods and technology to improve and expand the capabilities of screening systems. For the Department of Homeland Security (DHS) Science and Technology Directorate, the team assesses materials used to make commercial and military explosives, as well as HMEs. It also helps DHS's Transportation Security Administration develop screening standards for explosive threats.

Unraveling the Mysteries of HMEs

HMEs have emerged as the predominant threat to aviation security. In response, LEDP works to determine their composition, detonation characteristics, performance, and x-ray signatures. The program also continuously develops techniques to increase HME detection in airport screening systems. However, the wide variety of materials (and ingredient ratios) used to make HMEs—and the explosives' everevolving nature—makes them difficult to identify. Moreover, attempts to reproduce them (to better understand their potential effects) can be hazardous, since some permutations of materials used in HMEs could detonate while handling. LEDP's chemists test a range of ingredients in different proportions to get a general understanding of the detonation and explosive performance of HMEs. In turn, the program's engineers, computer scientists, and physicists have developed algorithms that may increase the efficiency and accuracy of x-ray screening and detection for all types of explosives. Some of these algorithms use deep-learning techniques, which could enhance discrimination between evolving threats and nonthreats.

Post-9/11, LEDP has played a key role in increasing the effectiveness of x-ray computed tomography (CT), technology that creates a 3D image of objects inside luggage as it passes through airport CT screening systems. By developing algorithms that enable these scanners to both image objects and determine the threat level of the scanned material (through its density, atomic number, mass, and x-ray attenuation), Livermore scientists and engineers have increased CT screening systems' ability to detect explosives.

To assess HMEs' potency and risk, LEDP researchers re-create and detonate them at Livermore's High Explosives Applications Facility (HEAF). The researchers have developed on-site capabilities to remotely mix HME precursors, scan the explosive mixture, and modify the material composition so that it is safer to handle. They also use a robot (Livermore Explosives iRobot, or LEXI) to deliver a mixture to the firing tank, where scientists conduct the explosions via remote control. This experimental data is used to characterize explosives performance and to validate the Laboratory's modeling and HME simulation results.

HME experimental data generated by LEDP helps DHS determine the effects of explosives on pressurized aircraft. In collaboration with others, the program combines high-performance computer modeling and simulation with experiments that assess the damage caused by HMEs to airframe components. The goal of these efforts is to determine the threshold quantity of explosives that would catastrophically damage an airplane. Models used to yield this information include detailed structural systems and forces to account for the airplane's type and altitude, as well as the specific location of the explosive at the time of detonation.

LEDP is working to speed up the rate at which detection standards for emerging threats are deployed to systems nationwide. X-ray measurements vary between airport screening systems manufactured by different vendors. Thus, Laboratory scientists are developing a method that standardizes the characterization process so that x-ray signatures are based on physical properties and are comparable across various CT screening systems used. In partnership with the DHS Center of Excellence for Awareness & Localization of Explosives-Related Threats (ALERT) at Northeastern University, LEDP researchers and others are developing adaptive automatic threat-detection algorithms to accelerate the field deployment of algorithms for new threats. LEDP is also investigating if convolutional neural networks and other deep-learning algorithms can be used to increase system performance.

This research was funded by the DHS Science and Technology Directorate under HME Program Manager Elizabeth J.C. Obregon.