Livermore scientists and their collaborators are developing a novel carbon nanotube membrane that can be used as uniforms for military and first responders to protect them from biochemical threats. 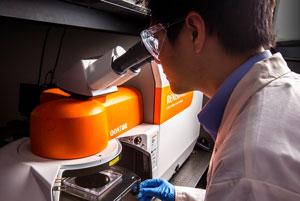 The nation’s military personnel routinely enter hostile environments in the line of duty. Some situations include potential exposure to biological, chemical, or organic hazards. Traditional uniform materials that provide protection from biological and chemical agents are based on heavyweight absorbents or full-barrier protection that restrict the body’s ability to cool by hindering the evaporation of sweat. As a result, personnel can only wear the protective gear for a limited time before succumbing to heat stress. Through funding from the Defense Threat Reduction Agency (DTRA), scientists in Livermore’s Biosecurity and Bionanosciences Group are leading an effort to develop a membrane material made from carbon nanotubes and responsive polymers that can provide breathable, on-demand protection. Within the membrane, nanotubes function as pores, spanning the entire film thickness.

The team starts the membrane fabrication process by growing vertically aligned carbon nanotubes (graphitic cylinders) measuring 30 to 40 micrometers tall in tightly packed arrays. The tubes have diameters less than 5 nanometers, which is 5,000 times narrower than a human hair and too narrow for bacteria or viruses to enter. A high density of tubes allows the membrane to provide outstanding breathability, even if the wearer is perspiring heavily. The scientists fill the gaps between the nanotubes with a vapor-deposited polymer made of parylene to prevent molecules from entering the inter-tube spaces. The tips of the tubes are then opened to enable water vapor to pass through at a high rate. The Livermore-developed material is twice as breathable as Gortex, yet protective.

A Smart Layer for Chemical Agents

Chemical agents are much smaller than biological agents and too small for the carbon nanotube membrane alone to block. For that reason, colleagues at the University of Massachusetts-Amherst, and the Massachusetts Institute of Technology are each working on alternative responsive materials to be added to the membrane surface. Both options rely on a “smart” sensor molecule built into the polymer material that will respond to the presence of a chemical agent. In one concept, the surface layer reacts by destroying the agent and then sheds the contaminated area from the membrane surface. In the other concept, the surface polymer layer collapses and seals the nanotube openings when exposed to a chemical agent, thus switching to a less breathable but more protective state, as needed.

Collaborators at the U.S. Army Natick Soldier Research, Development and Engineering Center, a military laboratory with a long history in testing materials for uniforms, are evaluating the properties of the nanotube membrane, the responsive layers, and the combination of the two. Developed materials meet several of the performance metrics that DTRA identified for next-generation protective gears, which include specifications for the uniform’s degree of breathability, the ability for the fabric to change in different environments, and the protection level for the wearers once they have been exposed to a hazardous agent.

The membrane fabrication method developed at Lawrence Livermore relies on batch processing. While this fabrication approach enables scientists to maximize membrane breathability and protection performance, the process is not suitable for large-volume production. Therefore, the research team will eventually move to a continuous, more scalable fabrication technique. Collaborating institutions Rutgers University and Chasm Technologies, Inc., have already begun working on a fabrication path that starts with tubes dispersed in a polymerizable solution. Scientists then align the tubes in the vertical direction with an electric field and cure the polymer to form a thin membrane with nanotube pores. These steps could be easily integrated in a roll-to-roll process. The primary challenge of this fabrication method is aligning open nanotubes across the membrane at a sufficiently high density to reach adequate breathability.

New uniforms embedding the smart nanotube membrane could be deployed within the next 10 years. The responsive carbon nanotube membrane provides an innovative solution for Department of Defense chemical/biological defense needs. The material will allow the nation’s military personnel to perform their duties and stay safe during extended periods in environments contaminated with chemical or biological warfare agents. For further information, contact Francesco Fornasiero at (925) 422-0089 (fornasiero1 [at] llnl.gov).