Responding to the Threat of Chemical Weapons 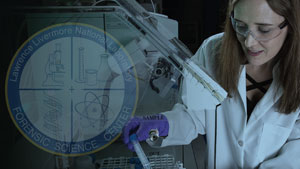 Chemical weapons are perilous instruments of mass destruction. In 1988, for example, Saddam Hussein killed 5,000 Iraqi citizens with chemical weapons. Several years later, in 1995, a Japanese cult released a nerve agent in a Tokyo subway that resulted in 13 deaths and thousands of injured people. In response to these threats, nations need the ability to identify and prioritize chemical security risks and investigate suspicious chemical incidents. However, some at-risk nations have a limited capacity to initiate or upgrade their detection, response, and forensic programs. They need support from experts who can help them respond effectively.

For more than 15 years, the Forensic Science Center (FSC) at Livermore has served as an internationally certified laboratory for identifying chemical warfare agents (CWAs). The FSC is one of only two facilities in the United States certified by the Organisation for the Prohibition of Chemical Weapons to analyze samples from suspected chemical weapons production facilities. In addition to verifying the presence of CWAs, FSC chemists analyze evidence after a suspected event to determine which toxins were involved and how the weapon was made. Both activities reduce the likelihood of chemical weapons usage and help ensure national security.

Since 2013, Livermore has led 30 training exercises in five countries—Iraq, Turkey, Lebanon, Jordan, and Yemen. Livermore scientists collaborate with each government’s designated agencies to identify needs and deliver training. In addition, Livermore experts conduct train-the-trainer programs, enabling local leaders to pass on their skills and knowledge to others.

When Livermore scientists visit other nations, they conduct tabletop exercises where they explain how to use tools for chemical detection and screening. Participants learn to identify the properties of hazardous chemicals, determine whether chemical surrogates are toxic, and classify different types of toxins. They also study ways of identifying low-risk chemicals associated with common industrial activities.

Another key part of chemical threat response training involves realistic field exercises. Participants engage in scenarios such as searching outdoors for suspected munition fragments, aiding victims exposed to chemical toxins, or examining a suspected chemical weapons laboratory. During these activities, participants practice with specialized detection equipment, such as handheld devices, that can measure temperature and oxygen levels. They also demonstrate how to safely collect samples and other evidence for forensic laboratories to determine if CWAs were used.