Growing up in Lima, Peru, Livermore chemist Carlos Valdez excelled in art and soccer. But his first love was science.

“I liked it because there was always a rational explanation for everything, and a solution for every problem,” he says. “In sixth grade, my dad got me a few test tubes. I’d gather my friends from the block and after playing soccer on the streets, we’d mix things together, such as water and soy sauce! Then I’d throw in Alka Seltzer—just to see what happened.”

By the time he entered high school, Valdez and his family had immigrated to Miami. Though he took classes in chemistry, mathematics, and physics, Valdez’s passion for chemistry only intensified during this period. At Florida International University, he majored in the subject, gaining lab experience as part of a research team aiming to make antiviral drugs to stop Hepatitis C replication. After graduation, Valdez spent a year as a National Cancer Institute fellow in Maryland. Then, he went on to earn his doctorate in chemistry from the University of California, Berkeley. While there, Valdez became the first person to successfully complete the 25 steps needed to synthesize the tetrasaccharide molecule (constructed of four sugars joined together) found in cancer cells. This was a big accomplishment as it provided the foundation needed for other researchers to produce an antibody that would enable the human body to fight against tetrasaccharides.

Now, at Livermore’s Forensic Science Center (FSC)—one of just two laboratories in the United States that are internationally certified to handle chemical warfare agents—Valdez spends his days working as part of a highly specialized team working to identify unknown chemical, biological, radiological, nuclear, and explosive threat substances and materials. Because FSC chemists work with real-world samples from all around the globe—often from environments where groups of people may have been exposed to the substance—the speed and accuracy by which FSC does its work has a significant impact on human lives.

Valdez’s specific role in the FSC analysis process is to synthesize a greater supply of the mystery sample material so that FSC’s analytical chemists will have sufficient amounts of the material to use when conducting identification tests.

“We need to make substances that are unknown at the time FSC receives them,” he says. “It’s a big puzzle, and there’s so many variants on the puzzle that we have to make a lot of things in the beginning. I like the challenge of figuring things out—that’s what initially drew me into science. Even after 10 years in this position, I’m still growing professionally and am constantly excited to take on new projects.” 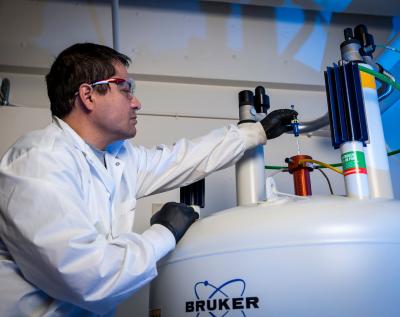 Though his daily work with unknown samples takes up much of his time, Valdez has been successful in leading multidisciplinary teams of scientists to carry out his own research projects. The most notable is a Defense Threat Reduction Agency (DTRA)-funded project ($2.3 million per year). After three years, the project culminated in the discovery of LLNL-02, an oxime drug that shows significant promise as the first brain-protective antidote against nerve agents such as sarin gas that can be lethal when inhaled (and cause severe, long-term neurological damage in humans that survive exposure).

“DTRA is interested to see if someone can develop a nerve agent antidote drug for humans that can cross the blood-brain barrier, because currently there is nothing available that can accomplish that. The current antidote does not provide such protection to the brain, and our lead candidate LLNL-02 does,” he says.

In laboratory tests, LLNL-02 has shown the ability to cross the blood-brain barrier and stop the neural degradation and uncontrolled muscle spasming that typically takes place after nerve agent exposure. This happens because the exposure triggers accumulation of the acetylcholine (ACh) neurotransmitter in the body’s central and peripheral nervous systems. LLNL-02 works by reactivating acetylcholinesterase, an enzyme that removes the buildup of ACh in both nervous systems. As a result of this removal, muscles stop spasming and contracting involuntarily.

Due to the promise shown so far, Valdez’s team has received DTRA funding for three additional years to evaluate the toxicity of LLNL-02 in animals.

“DTRA wants us to send in an investigational new drug application, which is the beginning of the process to get a drug approved through the Food and Drug Administration,” he says. “If we’re ultimately successful, a warfighter or exposed civilian would take LLNL-02 immediately after exposure. It would keep them alive and combat the agent in their bodies until they could get to a hospital for more intensive treatment.”