Over the course of her nine years at the Lab, Kips has conducted nuclear forensics workshops in several dozen countries, including Argentina, Germany, Ukraine, and Kazakhstan. The workshops are part of the U.S. National Nuclear Security Administration (NNSA)’s Global Material Security (GMS) program. GMS’s mission is to prevent terrorists from acquiring nuclear or radiological material that could be used in an attack on the United States, its interests, or allies.

“Including nuclear forensics in the GMS portfolio completes its chain of detection all the way from where it starts by installing nuclear radiation monitors at border crossings, seaports, and airports,” Kips says. “If nuclear material is found outside of regulatory control, the partner country can do assessments to find out what the material is and where it came from. If it’s uranium, for instance, then forensics can identify what kind of uranium it is and how it was intended to be used to determine the threat level.”

With a master’s degree in nuclear engineering, a Ph.D. in analytical chemistry, several years conducting research in uranium particle analysis, and a stint at the International Atomic Energy Agency (IAEA) as an inspector verifying that countries are adhering to nuclear nonproliferation treaty commitments, Kips holds a wealth of experience in each stage of the nuclear fuel cycle. She’s also fluent in five languages and currently learning Russian, skills that have likely facilitated global partnerships much more effectively than those that have been developed through communicating in a common third language such as English.

But nuclear forensics wasn’t always Kips’ biggest passion. Born and raised in Belgium, a country that sources half of its power from nuclear power plants, Kips was aware of the energy applications of nuclear science as a child—yet was more interested in aviation. During the frequent walks she took through the forest surrounded by her family’s sheep and horses in the small village where she grew up, Kips’ attention was often skyward, watching intently as low-flying planes approached Brussels Airport. 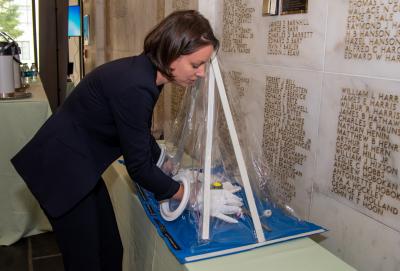 “I had my heart set on becoming a pilot, and I’d go to air shows. One of my first hobbies was gliding without an engine,” Kips said. “I tried to get into the program for the Belgian fighter plane pilot air force, but the physical tests were too tough.”

After determining that she probably wouldn’t become a pilot, Kips started studying physics at the Catholic University of Leuven. But she switched to engineering after realizing that her classes emphasized theory over practical applications. Soon after, she decided to pursue nuclear engineering.

“A physics professor inspired me,” she says. “He was good at telling stories and using metaphors with the subject. My interest was sparked because Belgium has a number of nuclear power reactors, a research reactor, and historically has had many fuel cycle facilities. In addition, I was intrigued by the whole concept of nuclear energy and how it helps with producing power and all sorts of uses in the medical field.”

Nuclear engineering was both specific and broad enough, she felt, to explore a range of interests and applications. So she continued her education with the doctoral program at Antwerp University while conducting research at the European Commission’s Joint Research Center (JRC) in Geel, Belgium, an organization that makes reference materials for all kinds of organizations and industries in support of EU policy. For her Ph.D. dissertation, Kips developed an apparatus that produces uranium oxyfluoride particles (similar to those that would be collected in an actual enrichment plant) to provide treaty verification organizations with a reference material and calibration standard. Kips sent particles (generated at JRC-Geel) to Livermore for testing—a collaboration that resulted in her coming to the Lab in 2008 for a postdoctoral fellowship.

Since her return to Livermore in 2014 (following her assignment at IAEA), Kips has been both expanding and deepening the partnerships between scientists at the Lab and partner countries. In addition to regular joint sample analyses—where countries exchange samples and analyze them as if they were real nuclear forensics samples in order to assess and improve their analytical skills—LLNL’s program has hosted scientists from countries such as Argentina, South Africa, Kazakhstan, and Canada to give them an in-depth understanding of nuclear forensics techniques and good practices.

The opportunity to visit and build relationships in so many countries, Kips reflects, has been beneficial in a fundamental way.

“The effect of traveling so much means that everything becomes familiar,” she says. “People rely so much on the news for their understanding of unfamiliar places, but once you’ve been there, it opens your mind and you see things from a different perspective.”