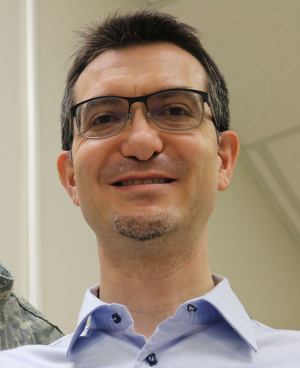 Livermore scientist Francesco Fornasiero has developed a smart material that can provide breathability and protection against deadly chemical and biological threats such as Sarin and the Ebola virus.

“Our mission is to solve a long-standing problem for first responders, medical personnel, and soldiers,” says the chemical engineer, who grew up in a small town near Venice, Italy. “Since their protective clothing can’t remove water vapor fast enough, perspiration gets trapped. This makes the garments uncomfortable and too hot to wear for an extended amount of time.”

Carbon nanotubes (CNTs)—hollow graphite cylinders with openings less than five nanometers in diameter, a width 5,000 times narrower than a human hair—provided Fornasiero with a partial solution. CNT openings are large enough for water vapor to escape, yet too small for biological threats (such as Ebola and the Dengue virus) to pass through. However, chemical threats cannot be blocked by CNTs because their molecules are much smaller than CNT openings.

Adding to the complexity of the effort was that the project sponsor (the Defense Threat Reduction Agency in the U.S. Department of Defense) was interested in a smart protective material—that is, one that could put up barriers on its own when chemical threats appeared.

As the leader of an interdisciplinary team that includes physicists, synthetic chemists, material scientists, and chemical engineers like himself, Fornasiero and his colleagues solved the problem by developing a material (dubbed Second Skin because of its ability to mimic human skin properties) comprised of: (1) a membrane base made up of billions of CNTs standing vertically side by side and (2) a layer of polymeric chains grafted on the surface of the membrane, with responsive functional groups embedded in the polymer molecules. (This top layer was developed by Fornasiero’s collaborator Timothy Swager, a chemistry professor at the Massachusetts Institute of Technology).

Fornasiero and his team envision that Second Skin will be incorporated into a soldier’s uniform between the outer fabric and an inner cotton liner (see photo).

“The broad spectrum of scientific expertise and resources located within the Livermore campus definitely had an impact on advancing our project,” says Fornasiero, who joined the laboratory in 2006 after receiving his Ph.D. in Chemical Engineering from the University of California, Berkeley and completing postdoctoral research at the Stanford Research Institute.

“Sometimes the tools you need are across the country and in different time zones. Here, you can try a new type of equipment right away and see if it works in your project,” he says.

The next phase in the project is to expand Second Skin’s protective properties to other chemical threats such as blister agents, and make the material stretchable (just like a sports jersey or wetsuit). After achieving those tasks, the team wants to tackle manufacturing challenges, such as producing the material at low costs and large volumes.

“What I like about working at Livermore is that I can leverage fundamental science to solve real-world problems,” says Fornasiero. “There’s an opportunity to develop materials and know-how that can be used to increase national security and personal safety.”