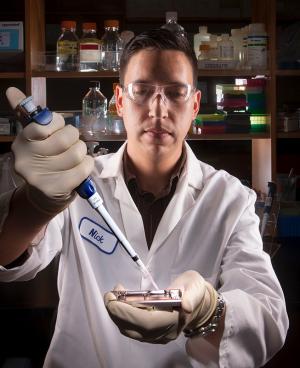 Born to a chemist father and a mother who was also educated in science, Livermore biochemist Nicholas Be clearly remembers what piqued his scientific curiosity for the very first time.

“I was playing with dry ice that my dad brought home,” Be says. “It smoked and disappeared without melting. That’s a wild thing for a little kid to see. I wanted to know why that happened.”

Asking his father this question was the first step that put Be on a path to studying biochemistry at Calvin College in Michigan. He then continued his education at the Johns Hopkins University School of Medicine, earning a Ph.D. in cellular and molecular medicine after completing his dissertation on the effect of tuberculosis in the human central nervous system. The Hopkins program teaches students how to conduct laboratory research using approaches that enable the results to be translated directly to clinical applications.

Be decided to come to Livermore for his postdoctoral training because of its mission-oriented focus.

“It was immediately obvious why scientists here do the work that they do,” he says. “The postdoc position with the Lab’s genomics research group was a good fit for me because its research is so close to the application space.”

Since his arrival at Livermore in 2011 and subsequent conversion to a full-time scientist three years later, Be has worked on a range of research projects. These include those aimed at developing better treatment plans for soldiers with infected combat wounds, testing candidate chemicals to develop a nerve agent antidote that can cross the blood-brain barrier (BBB), and determining if exposure to microbes on the International Space Station impacts the microbiomes of astronauts. 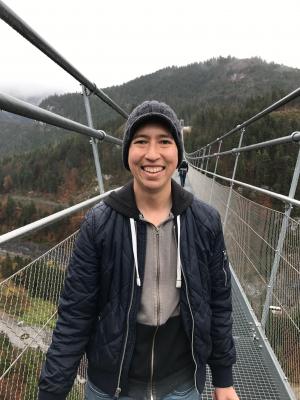 Funded by the Department of Defense and Livermore’s Laboratory Directed Research and Development Fund, the combat wound research project addresses the lack of quantitative data available for the bacterial pathogens present in these wounds (for instance, due to environmental debris or weaponry lodged in tissue). The absence of robust data in this area prevents health care providers from developing individualized treatment plans for wound infections in soldiers. Be—who specializes in microbial genomics—is the project’s principal investigator. His team, which is working in partnership with Uniformed Services University, characterizes the genomes of pathogens present in the wounds of U.S. soldiers returning from Iraq and Afghanistan using DNA sequencing and a Livermore-developed pathogen detection device called the Lawrence Livermore Microbial Detection Array (LLMDA). Be oversees a multidisciplinary team of researchers to carry out the project, including computational scientists who are developing machine learning models to predict the outcome of an injury for a patient based on the microbial data collected from soldier wounds.

Participating in the combat wound project also provided an opportunity for Be to grow his scientific leadership skills. As a postdoc, Be dedicated most of his time to analyzing samples collected for the project using LLMDA. After three years, he transitioned into the principal investigator role.

“A really important part of making this transition was having the guidance of great mentors at the Lab, as well as the leadership training provided here,” Be says. “The experience and advice of fantastic colleagues was—and continues to be—critical in navigating the transition into roles as a project leader.”

Be is also an integral part of the interdisciplinary research team (led by Livermore chemist and project Principal Investigator Carlos Valdez and funded by the Defense Threat Reduction Agency) that has discovered LLNL-02, an oxime drug that shows significant promise as the first brain-protective antidote against nerve agents (such as sarin gas) that can be lethal when inhaled and cause severe, long-term neurological damage in humans that survive exposure. LLNL-02 works due to its ability to cross the BBB. As the team’s biochemist, Be tested numerous chemical compounds Valdez made—which possessed structures with the potential to cross the BBB—in the laboratory to see if they were able to cross the membranes of blood vessel cells from the brain.

“I’m doing exactly what I hoped I’d be doing as a research scientist in this field,” Be says when reflecting upon his time at the Lab. “Livermore is unique in that if you have a question that you want to be answered and you don’t necessarily know the right method to answer it, there are people here who can help. There’s a lot of people here who have solutions you never would have encountered elsewhere.”