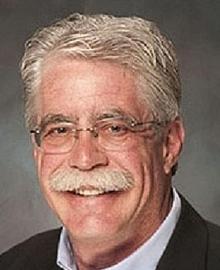 To Roger Aines, it’s all about how we ensure energy security while minimizing environmental impacts.

“How do we manage abundance? The U.S. is producing as much oil and gas as ever, which is great, but it brings with it the challenge of how to use it in an environmentally and climate-responsible way."

Roger is a geochemist who has been working on environmental remediation, management of carbon emissions, and monitoring and verification methods for carbon sequestration. He leads LLNL's Carbon Fuel Cycle Program, which looks at the energy, climate, and environmental aspects of carbon-based fuel production and use.

"The U.S. energy system puts about five billion tons of carbon dioxide into the atmosphere each year. How do we stop dumping while keeping the energy we love?" Roger said. "We know that we need to cut carbon emissions to zero within no more than 20–30 years, and we have a long way to go. But we’ve already cut emissions by 800 million tons.”

Roger is actively evaluating the role that direct capture of carbon dioxide from the atmosphere might play in a future where negative carbon emissions are required to maintain climate stability. He currently leads an effort to develop catalysts to increase the rate of carbon dioxide capture from gases.

Roger and his colleagues have developed a new carbon capture technique using tiny silicone bubbles or microcapsules filled with sodium carbonate. Made of a highly permeable polymer shell similar to what you find on a red kitchen spatula, these tiny capsules are designed to separate carbon dioxide in flue gases from power plants and other sources of emissions. The sodium carbonate reacts with carbon dioxide (CO2) and transforms it into harmless, stable sodium bicarbonate – the main ingredient in baking soda.

These "microcapsules" are easy to handle, recyclable, and should be a much more energy efficient way to scrub carbon dioxide from fossil fuel power plants.

"Working at the Lab gives you the opportunity to really change the world, and you get to do it often enough that it really feels like it is part of the job."